M&A in Vietnam and Asia

Network in Vietnam and Asia

Recently, Asian countries have achieved a remarkable development, which has brought out huge demand for M&A opportunities. We provide strong supports for the M&A transactions between Japan and Asia as well as Europe and America. We have built our own network globally and responded to the M&A needs of our client companies.

We have started M&A business in Vietnam from 2011.

Contribution in Vietnam with a High Evaluation from the Vietnamese Government

We participated in many activities in Vietnam.

Sponsor and Keynote Speaker at the 10th Vietnam M&A Forum

At the 10th M&A Forum on August 8th, 2018, RECOF was awarded as one of “The Best M&A Advisory Firms of the Decade” for being “the organization that made tireless efforts to promote M&A activities between Vietnam and Japan”. (Left) Mr. Vu Dai Thang (Deputy Minister, MPI) (Right) Mr. Le Trong Minh (Deputy Editors-in-Chief, VIR) 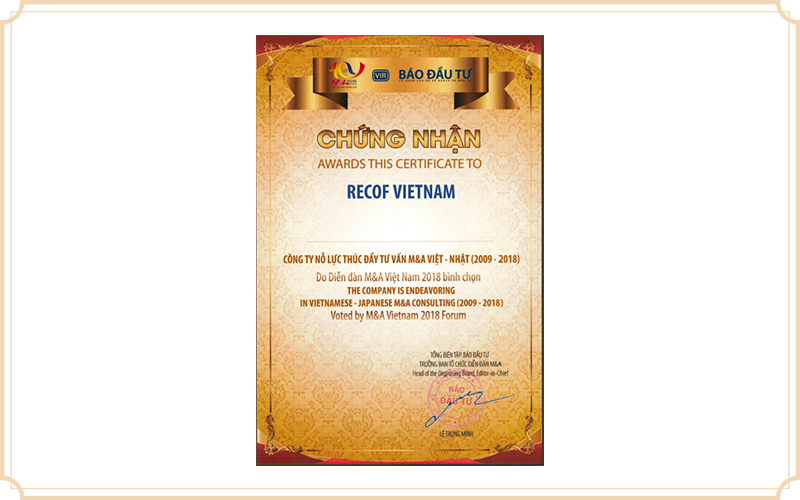 The letter of appreciation awarded by MPI

Widely Reported in the Local Media

Our comments on the recent trends in the M&A transactions between Vietnam and Japan have been widely reported in the Vietnamese media.

Our Founder's Activities in Vietnam

Founder's activities (Mr. Masaaki Yoshida): the Promotion of the State-level Projects to Strengthen the Ties between Vietnam and Japan

Masaaki Yoshida supported the establishment of "Kaizen Yoshida School" in HCMC in 2008. The school educates Japanese language and necessary business custom knowledge in Japan to young Vietnamese students, and sends them for training to Japan in the largest scale among similar schools in Vietnam.

In addition, he supported the development of Vietnam-Japan University in 2016, which was established as one of the organizations under the Vietnam National University in Hanoi.